What are Drug-Free Zones in Florida? 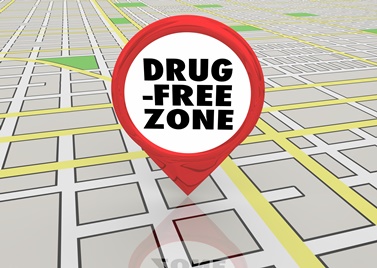 Every state bans the sale and use of illegal drugs and narcotics. However, Florida reserves its heaviest sentences for people accused of drug-related crimes inside designated “drug-free zones.” When someone is suspected of possessing, selling, or distributing a controlled substance inside a “drug-free zone,” they could face felony charges and years behind bars.

Florida lawmakers created “drug-free zones” to reduce drug use and drug-related criminal activities in areas of particular public interest. Most of these zones are places where children congregate. Today, Florida’s list of drug-free zones includes any space within 1,000 feet of a:

Florida’s drug-free zone laws are used to impose harsher sentences for anyone accused of:

Florida’s drug-free zone laws are not supposed to be used to enhance penalties for people suspected of simple possession. But in practice, prosecutors may still charge people possessing small quantities of illegal drugs with intent to sell.

Ordinarily, the possession, sale, or distribution of an illegal drug can be prosecuted as a first-degree misdemeanor, third-degree felony, or second-degree felony, with the severity of a charge dependent on the type and quantity of controlled substance recovered by law enforcement.

Have You Been Accused of Violating Florida’s Drug-Free Zone Statutes?

If you, or a loved one, have been accused of violating Florida’s drug-free zone statutes, you could be subject to severe penalties, up to and including imprisonment and a permanent criminal record.

Flaherty & Merrifield Criminal Defense has years of experience defending Floridians’ rights. We could help you preserve your freedom and your reputation. Please send us a message online or call us at 850-403-6835 to schedule your free initial consultation.